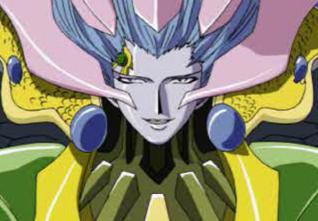 Zophar is the God of Destruction whose only purpose is to spread evil across the universe. His normal appearance is a black mass with red eyes and tentacles. He serves as the main antagonist of Lunar: Eternal Blue.

The Destruction of the Blue StarEdit

Zophar attacked the Blue Star millenia ago, corrupting its inhabitants by feeding off the greed in their hearts. Althena defeated Zophar, but at the price of destroying the Blue Star as well, just as Zophar intended. However, Althena was able to move the remaining humans to Lunar, giving the Blue Star time to heal.

Zophar was not gone for good. Once the Goddess Althena gave up her immortality, he was able to slowly recover by using the humans on Lunar to gather power. He turned Althena's religion into a fanatical cult known as Althena's Chosen who oppressed the humans of Lunar, creating strife and evil. It increased his power to the point where he could resurrect others and used Ghaleon, the former Magic Emperor, to aid in his plans for conquest. Through Ghaleon, Zophar was able to seal away the powers of the Four Dragons into objects called Auras. He entrusted the Auras to the Four Heroes, four of his most powerful followers. The Four Dragons were among the few beings who could seriously challenge Zophar's power, so without them, his return was virtually unopposed.

In Lunar: Eternal Blue, 1000 years after Althena's death, Zophar is nearing resurrection and all known challenges to his power are gone. Using an unnamed female, a false Althena conveys Zophar's wishes to the people of Lunar in the guise of Althena's message.

However, Zophar had not taken into account a group of young adventurers-Hiro, Ruby, Ronfar, Jean, and Lemina Ausa. Aided by Lucia, Princess of the Blue Star, they recovered the Auras of the Four Dragons and were able to enter the Goddess Tower. When Lucia learned of the Goddess' death, she gathered Althena's power to challenge Zophar, who by this time had successfully returned to Lunar. However, Lucia was unable to complete her task, knowing the consequences of destroying Lunar. In her hesitation, Zophar was able to capture Lucia and in doing so, gain Althena's power making him nearly invincible, and intended to destroy Lunar and recreate it to his liking. Ghaleon faced the heroes before they could reach Zophar, but was defeated, partially since he allowed himself to lose. At this point Zophar had realized that Ghaleon had been deceiving him into thinking he was his servant and caused him to no longer be able to live. The heroes faced Zophar, and despite his newly gained power, he seemed defeated, but was far from it. He then assumed an even more powerful form (which gameplay wise, is initially immune to damage). Ultimately however, Hiro freed Lucia, which made Zophar no longer invincible, and defeated his stronger form. Despite this, Zophar still wasn't beaten, and attacked Hiro and Lucia, at this point decided to simply just destroy the world. Despite only fighting the two of them (as opposed to before when he was fighting a party of five members), Zophar's remaining power wasn't enough and he was finally killed for good.

Zophar displayed a personality very similar to Ghaleon, possessed of a dry sense of humor, shown before fighting the heroes, after telling them that they would regret coming to face him for the rest of their lives, he joked and said that that would only be for about a few minutes, though he loses his witty manners when serious or angry. However, unlike Ghaleon, Zophar was completely evil. As the God of Destruction and Chaos, he seeks to cause destruction and to make others suffer simply out of his malevolent intent, and before his final defeat, he intended to destroy the world of Lunar out of spite for the pain Hiro and his friends caused him.

Zophar also shows himself to be a master manipulator, with how he was secretly controlling various events on Lunar to ensure his return. He is extremely patient, as it is likely he awaited his return for many millennia before the events of Eternal Blue. He is also skilled at head games with others, when he faced Lucia when she had Althena's power, Zophar caused her hesitation to not attack him by stating she would have to destroy the world to stop him, but also discouraged her from having faith in the humans being able to defeat him by informing that the power of humanity that Althena believed in was what allowed his return. Despite this, Zophar himself can be fooled, since Ghaleon was able to trick him into thinking that he was actually serving him loyally.

As an evil god and the final boss in the main story of Eternal Blue, Zophar is the strongest enemy in both games. He fights in three forms in both games. His first form is surprisingly weak (even acknowledged by the characters), possessing a standard set of attacks; this form however simply serves as his avatar in the world of Lunar. His 2nd and ultimate forms in both versions are much stronger, though his abilities greatly vary depending between the two. In the original, he is a boss with three pieces to him, his arms and head. Killing the head will result in the death of the arms, but unlike similar enemies in most RPGs, the arms have as much HP as the head (which is more than any other enemy in the game), so trying to kill them will triple the length of the fight, though doing so will reduce the number attacks he will use.

In the remake, Zophar's ultimate form (pictured below), is a five piece enemy, consisting of his head, two hands connected to his body, and two that aren't. The two hands that aren't connected will use Lucia's spells, and the other parts won't attack until they die. The two hands connected to Zophar, will respectively, use elemental magic that hits covers a large area and heal the other pieces of him. His head will use a magic attack the hits the whole party and an attack that hits a single character for several thousand damage, up to the damage cap of 9999 (making it an instant death attack). Once the head is killed, the other pieces of Zophar will also die, but most players prefer to kill the other parts first since unlike in the original, they do not have nearly as much HP as the head and killing them is considered an part of the fight because of the healing and damage.

In both versions, Zophar is intially invincible until Lucia breaks free from him, though in the remake the two hands that aren't connected to him can still be killed before she does. During this phase he attacks using Lucia's spells. After his ultimate form is killed, a weaker form of him, thought to be his true depowered form by some, is fought. Though the player only has Hiro and Lucia, the fight is considered extremely easy, as Zophar only has one attack in this form which isn't even very damaging. 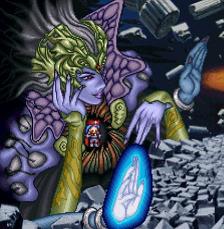 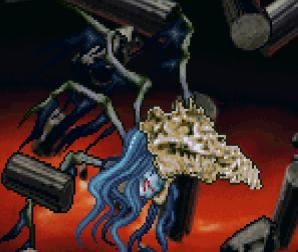 Retrieved from "https://lunar.fandom.com/wiki/Zophar?oldid=6652"
Community content is available under CC-BY-SA unless otherwise noted.