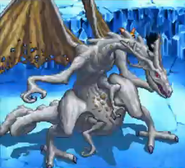 The White Fiend is an enemy encountered during Lunar: Eternal Blue and its remake. It is found deep within the White Dragon Cave, next to the entrance of the White Dragon Lair, stationed there to keep the party from entering the lair. Thus, forcing the party to do battle with it.

It is the first of four Fiends encountered in your journey to access the Goddess Tower, and is mistaken for the actual White Dragon itself when it is found, until Lucia explains to the party that it is an imposter and that she could sense an evil aura in its presence.

When battling against the White Fiend in Eternal Blue, it'll attack by striking one party member with a bolt of lightning, dropping icicles on a group of enemies, and breathing ice in a line.

Retrieved from "https://lunar.fandom.com/wiki/White_Fiend?oldid=5658"
Community content is available under CC-BY-SA unless otherwise noted.