Royce (ロウイス, rōisu?) is a character added into the remakes of Lunar: The Silver Star. She is the sister of Phacia and Xenobia, and the aunt of Alice. She claims to have the power to tell the future.

Royce was born to an unknown mother and father of the Vile Tribe, and is the youngest of the three sisters.

At some point prior to the beginning of Lunar: Silver Star Story Complete, she and the rest of the Vile Tribe agree to aid Ghaleon in his efforts to conquer Lunar in exchange for being allowed access to habitable land. While Xenobia accompanies Ghaleon and Phacia serves in Althena's temple, Royce sets up shop in Meribia.

Royce can be found at the beginning of the game in Meribia's Black Rose Street, advising Nash on an unknown matter. She is working as a fortune teller and will offer the group advice. The next time she will be encountered is after Alex's party escapes Vane's dungeons, where they discover the three sisters unmasked for the first time.

The sisters are "revealed" to Ghaleon as members of the Vile Tribe and they escape Vane. Afterwards, she is encountered throughout the game on various missions from Ghaleon. The last time Royce appears is disguised as Luna in the Fortress of Althena, where she makes a vain attempt at convincing Alex to leave, after which he realizes she's an impostor. After she reveals herself and flees further into the fortress, Alex's party eventually confronts and kills Royce, who is shocked that she was defeated. 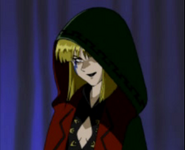