Neo-Vane was built by Borgan with the help of the False Althena. Neo-Vane floats in the sky because of the power of the Black Dragon aura which was given by the false goddess. without it, Neo-Vane is just a normal city without real grass and flowers. It also seperates those who are magic users and non-magic users as Borgan believes that a human's worth is within magic. This belief is proven wrong by Lemina Ausa 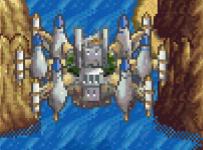 Retrieved from "https://lunar.fandom.com/wiki/Neo-Vane?oldid=6473"
Community content is available under CC-BY-SA unless otherwise noted.