Mel de Alkirk (メル・デ・アルカーク, meru de arukāku?), also known as Hell Mel is the governor of Meribia. He has incredible prowess with an axe and was once a tyrant of the seas as a former pirate.

Mel is one of the four heroes, along with Dragonmaster Dyne, Ghaleon and Lemia Ausa. He joined them after he and Dyne battled for several days, in an attempt to stop his tyranny.

Many years after Dyne sacrificed his powers for Althena to become the human, known as Luna, he became the governor of Meribia, and had a child with a human woman. His child, Jessica, as a result of Mel being a beastman, was half human, half beastman. Mel believed Jessica was a well mannered child who was a student priestess, however when not around her father, she had a different persona. After Ghaleon's capture of Luna, Xenobia attacked Meribia, Alex and Jessica managed to find Mel during the attack, battling with Xenobia. Xenobia then attacked Jessica, and Mel sacrificed himself, and as a result was turned to stone. Jessica attempted to revive Mel, but realized that only defeating the witch could reverse her curse. After finally defeating Xenobia, Mel returned to his normal state and continued governing Meribia.

Founder or Governor of Meribia?[]

In the English version of Lunar: Silver Star Story Complete, an NPC says that Mel founded Meribia, although in the Japanese version, the same NPC says he merely governed the city.

In the later released "Lunar: Silver Star Harmony" for Sony PSP, some NPC's state that Mel took over as mayor of Meribia after settling down from his pirate days, and that they have never have been so prosperous before he took command. 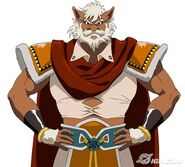