As with the first game, Lunar 2 features an enormous amount of material appealing to game players on a personal level. The story features likable characters engaged in quests that will help them mature as people; in particular, the two main characters develop a powerful romance. The dialogue is also a standout, as even minor characters have large quantities of dialogue. There are several hand-animated full-motion video cutscenes, as well as a notable soundtrack, and after coming to the end of the initial game, an optional second adventure may serve as an epilogue.

Lunar 2: Eternal Blue Complete (ルナ2エターナルブルー, Runa Tsū Etānaru Burū?) is a remake of Lunar: Eternal Blue (ルナ エターナルブルー, Runa Etānaru Burū?), a 1994 Japanese role-playing game. It is the sequel to Lunar: Silver Star Story Complete. Originally released for the Sega Saturn in 1998, it was ported to the PlayStation in 1999 and translated for the North American market in 2000 by the US publisher Working Designs. The game is part of the Lunar series.

Similar to the critical reaction of the first game, praises were given to Lunar 2 for featuring an enormous amount of material appealing to players on a personal level, particularly likable characters with quests helped with their growth to maturity; in the case of two main characters, they develop a powerful romance. The dialogue is also well-received as even minor characters have rich amount of dialogues. There are several hand-animated full-motion video cutscenes, as well as a notable soundtrack, and after coming to the end of the initial game, an optional second adventure may serve as an epilogue.

Set one thousand years after the events of The Silver Star, the game follows the adventure of Hiro, a young explorer and adventurer who meets Lucia, visitor from the far-away Blue Star, becoming entangled in her mission to stop Zophar, an evil, all-powerful being, from destroying the world. During his journey across the world of Lunar, Hiro and Lucia are joined by ever-expanding cast of supporting characters, including some from its predecessor.

The story takes place approximately one thousand years after the events of Lunar: Silver Star Story Complete. Once again, Lunar (an inhabited moon that circles a planet called The Blue Star) is endangered, this time by the return of Zophar, the God of Evil responsible for the destruction of life on the Blue Star millennia before. This causes Lucia, a being assigned the task of eventually reviving life on the Blue Star, to awaken before her time and set forth on a mission to once again eliminate Zophar's influence.

The story unfolds from the perspective of Hiro, a teenaged archaeologist who resides in the Salyan Desert with his grandparent and adolescent dragon companion Ruby (who, like Nall in the previous game, resembles a talking, winged cat). The game begins with Hiro and Ruby pilfering a Dragon's Eye jewel from one of the several ancient ruins in their region. The escapade ends with Hiro inadvertently setting off a trap that forces them to flee from the ruins and ultimately prevents their return.

On the way back to the research outpost, Hiro and Ruby are stopped by a principle member of Althena's Guards, the arrogant and boisterous White Knight Leo, who informs them that a 'Destroyer' is to appear at the ruins to the Northwest and that they should return to their homes immediately. Upon arriving at their home, the two find Leo attempting to extract information about the nearby ruins (referred to as 'The Blue Spire') from their grandfather Gwyn, an elderly archaeologist, in the hope of achieving access to the ruins' impenetrable interior. Finding Gwyn of little use, Leo departs, leaving the three of them to ponder the arrival of the so-called 'Destroyer'. After Leo's departure from Hiro and Gwyn's home, Gwyn has some suspicions about the spire Leo threatens to blow the doors off. Hiro's grandfather goes up to the roof to watch, and a few moments after he does, he frantically call for his grandson's attention.

After speeding up the ladder, Hiro and Gwyn watch together as a mysterious light falls from the sky and into the spire not far from their home. Gwyn reports to Hiro he's lived beside the spire for many of his years and has never seen anything like that before. This sparks the fire of adventure in both the youthful Hiro and the experienced archaeologist, and the two set out to investigate the strange light.

The differences between this title and Lunar: Eternal Blue on Sega CD are numerous. The Lunar 2 remake implements many of the same gameplay revisions as are found in Lunar: Silver Star Story Complete; there are no battles on the overworld and no random encounters. Also like Lunar: Silver Star Story Complete, the size of most of Lunar 2's many dungeons decreased substantially from the original game. Four dungeons were cut from the remake, and several new ones were added (the exact number varies from Saturn to PlayStation). The Magic Experience system from the original game does not appear in the remake.

The graphics are more detailed than in the original release, due to the higher resolution and broader color palette of 32-bit platforms, compared with the Sega CD. While many monsters from the Sega CD version recur, they are all redrawn, and a number of bosses look quite different. The overall number of full-motion video (FMV) cutscenes in Lunar 2: Eternal Blue Complete is about 35, significantly reduced from the original MegaCD/SegaCD version's 61. A number of short, scene-setting cutscenes and minor character introductions were cut from the remake. Despite this, the total amount of FMV time is longer in the remake because many scenes were extended.

The packaging for the PlayStation game contained poster of the cover art on one side, and a map on the other, along with a hardcover instruction booklet, paper standee's of the characters, and a large replica of Lucia's pendant. Many game-stores had promotional Ghaleon punching puppets for pre-orders. There was also to be an Alex punching puppet for the pre-order for the computer game, but was never made, therefore, the Alex punching puppet has never been made available.

Like its predecessor, the game received positive reviews from critics. The Saturn version holds an average aggregate score of 93% at Sega Retro.[1]

GamePro gave the PlayStation version ratings of 3.5 for graphics, 4 for sound, and 4.5 for controls, with an overall score of 4.5 out of 5. They criticized the graphics as "certainly pre-Final Fantasy VII, with simple cartoony sprites and limited animation," but stated that the "cinemas are excellent, moving the story along and further illuminating the characters" and that the "soundtrack is replete with stirring music and fine voice-overs". They concluded that with "an engrossing story, excellent character development, and plenty of challenging gameplay," Lunar 2: Eternal Blue "has what's most important in a great" role-playing game, "a strong bond between the player and the characters."[13]

IGN gave the PlayStation version a rating of 8 out of 10, criticizing the graphics but praising the game's fun and simplicity. They stated, "This is exactly what the PlayStation needs [...] Instead of hiding behind a cloak of seriousness, it extracts qualities from simple themes that redeem it as a charming, fun game."[16] The January 2001 issue of Official U.S. PlayStation Magazine criticized the dated graphics, but stated that "despite its limitations," Lunar 2 "still stands far above many of today's "modern" RPGs, offering a delightfully refined gaming experience" and "some of the best writing ever in a console RPG." They described the battle system as "simple" yet "deep" and "strategic" but criticized the "frequent slowdown and long battle load times."[17]

Overall, the game received very favorable reviews from critics, as well as positive reviews from fans, who have given the PlayStation version a current average rating of 9 out of 10 on GameFAQs,[41] making it one of the site's highest user-rated RPGs for the original PlayStation. 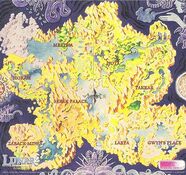 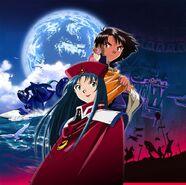 Add a photo to this gallery

Retrieved from "https://lunar.fandom.com/wiki/Lunar_2:_Eternal_Blue_Complete?oldid=6627"
Community content is available under CC-BY-SA unless otherwise noted.