Lunar: The Silver Star (also known as Lunar: Silver Star in Japan) is the first game of Lunar series. It was developed by Game Arts and Studio Alex for the Sega Mega-CD console. Originally released in Japan on June 16, 1992 to critical acclaim, the game was translated and released in English by Working Designs the following year. Designed as a "different kind of RPG", Lunar: The Silver Star made use of the up-and-coming disc format by featuring CD-quality audio, video playback, and voice acting to narrate a fantasy story set in a magical world. As the number one selling Mega-CD title in Japan, the game sold nearly as many copies as the system itself, and remains the second highest-selling Mega-CD title of all time. It was followed by a direct sequel, Lunar: Eternal Blue in 1994. Since the game's original release, three enhanced remakes have been produced for various systems: Lunar: Silver Star Story Complete, for the Sony Playstation in 1999, Lunar Legend for the Game Boy Advance in 2002, and Lunar: Silver Star Harmony for the Playstation Portable in 2010.

Much of the plot of Lunar: The Silver Star was written by novelist Kei Shigema, and involves a world of high fantasy and magic with emphasis on folklore and legend.

The game takes place in the fantasy land of Lunar, a small habitable world orbiting the massive, barren Blue Star, forming a loose parallel between the game's world and the Earth and its moon. Centuries before the start of the game, the Blue Star was rendered uninhabitable by years of war and reckless use of magic. The powerful and benevolent Goddess Althena relocated humanity to the Silver Star, the world of Lunar, and entrusted four dragons to safeguard the elements of the new world.

From this point on, those who would use the power of the dragons to serve the goddess and protect the world were known as "Dragonmasters", and no such Dragonmaster was more revered than Dyne, a legendary hero who defended the goddess and succumbed to an unknown fate. The stories surrounding Dyne's exploits would form the life model for a young boy named Alex, the game's protagonist and central character, who also aspires to become a Dragonmaster himself.

Many of the locations of Lunar: The Silver Star were given a deliberate "northern" feel to present an environment that was cooler than the settings of most role-playing games, if only to allow the characters to wear more clothing. Many towns and locations were based on areas of Russia and Medieval Europe.

The game begins in the small mountain town of Burg, where young Alex Noa frequently visits the monument to the fallen hero Dragonmaster Dyne. At the behest of Ramus, eager son of the town mayor, they embark on their first real adventure with their friends, Nall

and Luna Noa to the mysterious Dragon's Cave in search of a valuable dragon diamond. Making their way through the cavern, they meet Quark, an aged dragon who senses great potential in and urges him to complete the trials of other dragons to became the next Dragonmaster, champion of the goddess Althena, and protector of the world.

Quark also gives Alex the Dragon Ring to honor his succession of the trial. Quark shows interest in Luna as well, remarking that she has a familiar aura about her. Obtaining the Dragon Diamond from Quark, Ramus realizes that he cannot sell it in Burg, and must travel to the major trade city, Meribia to claim his fortune.

On their way to Saith, they meet a friendly traveler Laike in the Weird Woods. Eventually they enter Saith, a small port town. Unfortunately they could not sail to Meribia because the Captain lost his sea chart. They also meet Nash, a magician and the apprentice of Ghaleon, one of the Four Heroes, while doing an important mission from the hero himself. He notices that they going to travel using the same boat so he invites them to a quest for the retrieval of the sea chart. Alex agrees to join him.

Alex and his friends arrive in the Old Hag's house, which is rumored that she has the sea chart. In exchange for Nash's Water Staff, they recieve the sea chart. However, they are still unable to set sail because the lighthouse does not emit light ever since monsters were residing there. When they reach the top level, they fixed the lighthouse light with a flint given by the Captain. After their success, Luna begins to feel proud of Alex as he become more courageous than ever since their childhood. When they finally reach the docks to set sail, Luna realizes that she has to farewell to Alex because she decided to stay with Alex's father and mother due to the fact that she could not leave them alone.

As they arrive in Meribia, Nash departs from the group and stays in Black Rose Street for a while. Alex eventually meets one of the Four Heroes and the governor of Meribia, Mel de Alkirk. The group then makes their way to the jewel store to sell the Dragon Diamond. The owner of the shop, Dross, amazed by the beauty of the diamond, purchased it. Dross then tells them to wait for him while he collects money from his safe in a room in his shop. After waiting extensively, they soon realize that they were scammed. The group immediately chases Droll to the sewer, but then the sewer is overrun with monsters that ordinary weapons can't harm. They realize that it will be much easier if Nash accompanies them. Nash hears the news, and tells them that the shop he was staying in can unleash the magic power within them. Alex then acquires fire magic and is qualified as a magician, while Ramus obtains nothing, due to his lack of magic power. Nash now believes that Alex can take this matter by himself without him. Eventually, they find Dross. He then surrenders and gives them the money. Alex and Ramus split their money and Ramus is overjoyed.

Nash sensed that Alex has a talent in learning magic. He encourages him to learn magic at the Magical City of Vane. Alex agrees but Ramus could not join because magic is beyond his capabilities. After parting their ways with Ramus, they travel to the Transmission Springs at the far south of Meribia to get to Vane. Unfortunately, only Alex could enter and be tested at the Cave of Trial before any of them can enter the magic city. The Cave of Trial will determine if a person has enough magic power to enter Vane. If the testee defeats the monsters throughout the cave and reach the exit, the trial will be completed. Alex eventually completes the trial and is permitted to enter Vane.

In the magical city of Vane, Alex meets Mia Ausa, daughter of Lemia Ausa, Vane's ruler and one of the Four Heroes. Mia is worried about her mother, saying that her mother is acting strange recently. At the guild, Nash meets with Alex and takes him to Ghaleon, one of the Four Heroes. Ghaleon is interested to see how much power Alex possesses, so he gives Alex an assigment to prove his worth. The assigment is to visit a small fishing village called Lann and prove wrong a man who claims himself to be the next Dragonmaster.

When they arrive at Lann Alex and the others meet Jessica, the junior priestess. She heard that there's a man who abuses the townspeople of Lann, and she wanted to get to the bottom of this problem. She also said she had a fight with a certain 'jerk' in Nanza, so to blow off her steam she invites Alex and the others join her to solve this weird event in the village. Alex agrees.

Arriving at the island across the village, where the impostor resides, the group make their way and face the fake Dragonmaster, Zoc. After Zoc was exposed, he promises that he will stop being a evil man. He then escapes and Jessica part ways with Alex and the others.

Ghaleon is impressed of Alex for succeeding the task. He then tells Alex to meet the leader of the Magic Guild and one of the Four Heroes, Lemia Ausa. Soon, Alex meets Lemia but he is immediately accused by her, calling him a filthy urchin and waif, she then orders the guards imprison him. As the guards drag Alex away, Nall merely escapes. While in prison, Mia, asked by Nall to help Alex, comes to rescue Alex, and apologizes about her mother accusations. She also believes her mother is under some sort of a curse, and the only way to break the curse is through the help of the Goddess' Mirror located at the top of the Silver Spire.

Lunar: The Silver Star was well received in Japan, selling an estimated 100,000 copies, its entire production run, in its first year after release, nearly as much as the Mega CD itself.[17] It is considered the Mega-CD's first hit game, which Sega credits solely for pushing the system's sales in that region.[16] The game remains the best-selling Sega CD title of all time in Japan, and second highest selling worldwide behind Sonic the Hedgehog CD. Readers of Japanese magazine Megadrive Beep voted it the number one Mega Drive role-playing game for 17 straight months before being trumped by Shining Force II.[17]

The English version released the following year met with a similar response, with Skid of GameFan magazine calling it "far and away the best RPG I have ever played in English", praising the game's graphics, sound, and story as "well conceived and executed".[6] The magazine's editors would later name it as the greatest role-playing game of 1993.[16] GamePro similarly reviewed it as "not just the best Sega CD RPG ever, but one of the best on any Sega system", giving particular merit to the game's translation.[8] Game Players described it as a "solid RPG, and well worth your time" but found fault in the game's small character graphics that "look like every other RPG" and the virtually non-existent replay value.[10]

Electronic Gaming Monthly had five reviewers, Ed, Dano, Al, Sushi-X, and Mike, give the game scores of 9, 8, 7, 7, and 7, respectively, ranging from "worthy" to "virtually flawless" ratings. The magazine commended the game's background music soundtrack but described its battle sequences as "a bit dull."[18] EGM's 1999 Video Game Buyer's Guide listed four of these scores, 9, 8, 7, and 7, adding up to 31 out of 40 overall, and described the game as "one of the best RPGs ever."[4] Electronic Games said the gameplay is "nothing terribly original" and expected "better game graphics from a CD game," but praised the "fun" story, "excellent" interface, "nice" graphics, "solid" gameplay, "excellent" sounds, and "great" characters, particularly Nall for providing information ("such as what monsters are attacking" and the "chances with them") and "services (save, load, party order)," a "completely original" and "great touch."[9] Mean Machines Sega gave it ratings of 83% for presentation, 69% for graphics, 82% for sound, 85% for playability, and 87% for lastability, with an overall 86% score, concluding that it "is the only dedicated RPG for the Mega-CD" and "it's good."[11]

As the number one selling Sega CD title in Japan, the game sold nearly as many copies as the system itself, and remains the second highest-selling Mega-CD title of all time.[16] Mega placed the game at #8 in their top Mega CD games of all time.[19] In 2006, Lunar ranked 113th in EGM and 1UP's list of the greatest "videogames of their time," celebrating the games that were considered the best during their original release.[20] 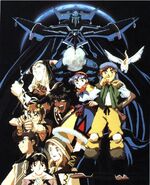