The game follows the story of Alex Noa, a boy from the small farming village of Burg who thirsts for adventure and dreams of becoming a Dragonmaster. With the help of his friends Ramus and Luna, Alex overcomes the White Dragon's trial and takes his first step towards becoming a Dragonmaster. The three sail to the city of Meribia to sell the Dragon Diamond that they also received from the White Dragon. On their way, they meet magician by the name of Nash who joins them. Nash tells Alex that Ghaleon and Lemia, the leaders of the city of Vane, should be able to tell him more about the other Dragons, as they were close friends of the late Dragonmaster Dyne and the party sets out for Vane.

The game starts with Alex talking about his dreams of having great adventures in front of Dyne's Memorial, in the village of Burg.

After admiring Dyne's monument, Alex and Nall run into Ramus who tells about the newly opened White Dragon Cave. Before heading off, Alex heads to the spring to meet with Luna. She gets upset about not telling where they're going and decides to tag along to keep them out of trouble. After receiving some equipment from their home, Alex and Luna meet up with Ramus at the entrance to town and embark on their first adventure.

When the party first enters the White Dragon Cave, a giant block of ice is blocking the entrance, however Alex destroys the block using his Flame Ring. After fighting through a few waves of enemies, they encounter Quark, who, after a brief conversation, agrees to give the party a Dragon Diamond if they first find the Dragon Ring.

Alex Finds the Dragon Ring, and brings it back to Quark, who rewards the party with the Dragon Diamond. They go back to Burg to sell it.

The party tries to sell the Dragon Diamond in a local shop in Burg, only to discover that they don't have enough money to buy it, and they have to go to Meribia. Alex and Ramus decided to go without Luna.

Ramus and Alex try to get through the Weird Woods to Meribia, but the dense fog prevented them from going deeper. Alex heads home and gets chewed out by Luna but eventually make up, and she makes up her mind to come with them. After resting up for the night, and a short talk at Dyne's monument, all 4 adventurers head out for Meribia once again.

The fog isn't any less thick than last time, but thanks to Luna's singing the fog suddenly clears away and they are able to traverse the forest. As they make their way across, they are surrounded by monsters but are able to defeat them with the help of a traveling warrior named Laike. The next morning, they make it out of the woods and head for the port town of Saith.

The party arrives into town and immediately head for the docks. But when they speak to the captain, he says that he lost his Sea Chart in a game of chance against a gambler named Brett. After learning of the plight from the other sailors, they decide to get the chart back through a coin toss. After losing twice, Ramus gets suspicious and comes up with a plan. He bets the Dragon Diamond and just when the game ends, he bumps him and reveals the coin to be a two-headed coin! Even after all that, Brett confesses that he doesn't have the chart, for he traded it to an old hag for a Fortune Cane. He gives it to the party and suggests trading it back to her at her hut in the woods west of Saith.

As they make their way through the forest, they arrive at the hut and find simple traps in front of them. As Nall comments on how no one would be stupid enough to fall for it, one of them starts shaking. Inside was a boy named Nash, a member of Vane's Magic Guild. After the introductions are made, they head into the hut and find the hag in her room. After convincing Nash to trade the Water Cane for the Sea Chart, they head back to Saith.

After giving the captain his Sea Chart back, a new problem surfaces: a monster has suddenly attacks the ship due to the cargo of fish aboard. They head out to the ship and fight against a viscious Saline Slimer. After defeating it, the captain offers to take them to Meribia free of charge. Luna decides to stay behind, but after casting off, Alex wants Luna to come with him. After reaching out for her hand, he catches her and they begin their voyage to Meribia.

Upon arriving in Lyton, the party is confronted with horrible music throughout the town. The villagers explain that the town's shrine is the source of the town's music, but it has become overrun with monsters and thus the music has become corrupted. The party initially resolves that this isn't their problem and that they should continue searching for the Blue Dragon which is more pressing, but the people of Lyton inform them that they are the caretakers of the Blue Dragon's Shrine. The village leader offers to help Alex get into the Shrine if he will restore their village's song.

Alex agrees and after defeating the monsters in the Shrine, the town's song returns to normal.

With the song of Lyton restored, the village leader informs Alex and his party that the Blue Dragon Shrine can only be called out of the lake if two people who are deeply in love with each other sing together. Jessica and Kyle make an attempt, but fail; both blaming each-other. Mia and Nash make an attempt as well, but both blame themselves when they too fail to raise the shrine.

Alex decides that he will try as well, and begins playing "Thoughts Far Away" on his ocarina. Mysteriously, Luna begins singing in the bowels of the Grindery along with Alex, regardless of the incredible distance separating them. Xenobia, Phacia and Royce appear and speculate that Luna is singing to help herself cope with her imprisonment. Ghaleon is seen overjoyed that Luna is singing, as the more she sings the closer she will be to her "awakening". Nall interrupts Alex, asking him to stop as the song reminds him of Luna too much. Alex finishes the song anyway, and suddenly the entrance to the Shrine rises out of the lake. The party collects their equipment and ventures inward.

After fighting their way through the cave, the party arrives at the Blue Dragon's lair. Though they were concerned Ghaleon may have already gotten to the Blue Dragon, the Blue Dragon is alive and well in his lair, assuaging their worries. The party attempts to warn him about what Ghaleon plans to do, but he won't let them get a word in. He tells them to collect his Helmet from a room in his lair and that he will hear of their adventures once that is done. When Alex succeeds in retrieving the Helmet and returns to the Lair, however, the Blue Dragon is gone and in his place stands Phacia. Phacia tells them that if they cease their battle against Ghaleon he will probably spare them. The party quickly rejects the offer and prepares to attack Phacia, but she teleports away before they can strike her.

Pao and the Black Dragon Fortress[]

They go to the Althena's Fortress using the White Dragon, Nall, and fight several monsters, until Royce, disguised as Luna, attempts to make them leave. She fails, and puts a curse on the party, which makes at least 2 party members start a battle asleep.

The Saturn version of Silver Star Story was well received in Japan, with Weekly Sega Saturn Magazine recognizing it as one of the most memorable gaming experiences of 1997.[4]

In Japan, the PlayStation version received a 7 out of 10 score from Hyper PlayStation magazine, remarking that although it contained lower quality visual effects and movie playback than the previous Saturn releases, it still remained a solid role-playing game.[22] It sold enough to qualify for Sony's PlayStation the Best distinction, and was subsequently re-released in Japan in April 1999 at a budget price.[27]

Silver Star Story Complete sold over 223,000 units within its first year in North America,[28] including the entire production run of the four-disc collector's edition.[29] The game became the highest-selling Working Designs title to date, and the second highest-selling PlayStation role-playing game of 1999 behind Final Fantasy VIII.[30] A heavy media push in magazines and websites brought recognition to the game, and alerted customers that Working Designs planned to cease production of the title starting December 31, 1999.[30] English reviews of the game were typically favorable, with critics such as Electronic Gaming Monthly remarking that Lunar's "plot, writing and voice acting are about the best you'll find", awarding the game an editor's choice gold award.[8] The game's translation was equally applauded by PlayStation: The Official Magazine, calling it "spotless", and remarking that Working Designs' unique humor was applied to every bit of text in the game, including weapon descriptions.[14] Official PlayStation Magazine remarked that "what little [Lunar] lacks in visual punch, it more than makes up for in style, story and wholly engrossing gameplay" calling attention to the game's programming and extra packaging.[13]

The game's two-dimensional graphics were among its most panned feature, with GamePro commenting that the "flat battle areas, wimpy spells, and itty-bitty enemies will assault your eyes", citing the in-game animated cut scenes as the only saving grace.[10] Game Informer conversely declared that the animated interludes were grainy and often would not display in true fullscreen, but remarked that it was "really a small gripe because Lunar has an entertaining story filled with enjoyable quips".[9] Gamers' Republic recognized the inferiority of Lunar's graphics to current role-playing games, but nonetheless found them "charming".[31] GameSpot simply described the graphics as "truly dated", adding that many of Lunar's aesthetic qualities could be re-created on a Super Nintendo.[11] Technology magazine Silicon Mag called the game a "masterpiece", awarding it a 95% rating and declared it an asset to the game industry, calling it "a game that will sell systems, with gamers actually buying PlayStations just to play it."[24] In 2000, Silver Star Story Complete ranked 22nd in IGN's list of top PlayStation games of all time,[32] while in 2001 Electronic Gaming Monthly ranked it 75th on its list of the top 100 games of all time.[33] 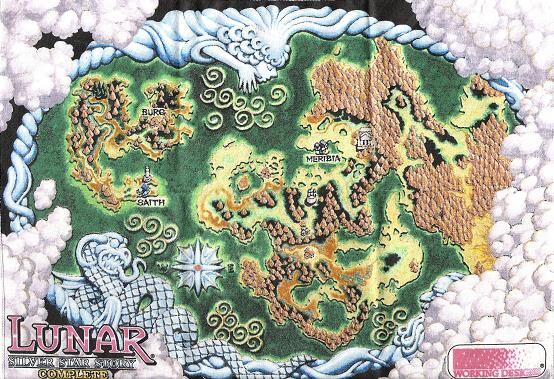 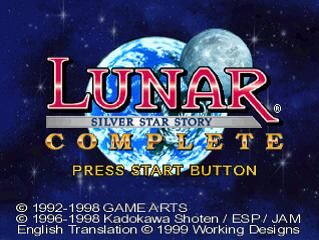