Lunar: Eternal Blue (ルナ エターナルブルー, Runa Etānaru Burū?) is a role-playing game developed by Game Arts and Studio Alex for the Mega-CD as the sequel to Lunar: The Silver Star. The game was originally released in December 1994 in Japan, and later in North America in September 1995 by Working Designs.

The game was remade in 1998 as Lunar 2: Eternal Blue Complete.

Set one thousand years after the events of The Silver Star, the game follows the adventure of Hiro, a young explorer and adventurer who meets Lucia, visitor from the far-away Blue Star, becoming entangled in her mission to stop Zophar, an evil, all-powerful being, from destroying the world. During his journey across the world of Lunar, Hiro and Lucia are joined by an ever-expanding cast of supporting characters, including some from its predecessor.

Lunar: Eternal Blue was developed by Game Arts and Studio Alex, with project director Yoichi Miyagi returning to oversee the production of the new game. According to scenario writer Kei Shigema, the game's concept of an oppressive god came from the image of Sun Wukong, hero of the Chinese epic Journey to the West, being unable to escape from the gigantic palm of the Buddha.[1] Shigema stated that "it was a picture showing the arrogance of a god who is saying, 'In the end, you pathetic humans are in my hands.' The moment I understood that, I thought, 'Oh, I definitely want to do this,' it'll definitely match perfectly. So we used it just like that."[2] Eternal Blue took three years and over US$2.5 million to produce, and contains twice as much dialogue as its precessor.[3]

The game's North American version was translated and published by Working Designs, who had previously produced the English release of The Silver Star. Headed by company president Victor Ireland, the game's script contains the same light humor of the original, with references to American pop culture, word play, and breaking of the fourth wall not seen in the Japanese version. Working closely with the staff at Game Arts, Working Designs implemented design and balance fixes into the American release, including altering the difficulty of some battles that were found to be "near impossible".[4] Finding little risk in the ability to save the game anywhere, Ireland's team added a "cost" component to the game's save feature, where players would have to spend points earned after battles to record their progress, remarking that "[We] wanted to make the player think about where and when to save without making it too burdensome."[5]

Lunar: Eternal Blue sold well in Japan despite an estimated retail price of JP¥9,900, nearly the equivalent of US$100 in 1994,[3] or $159 in 2015. The game would go on to sell less copies than its predecessor, Lunar: The Silver Star, yet still became the second highest selling Sega-CD game in Japan and third highest selling worldwide.[22] Eternal Blue received a score of 30 out of 40 in Japanese magazine Megadrive Beep!,[16] with fellow Sega publication Megadrive Fan calling the game "fun" and featuring an official manga strip written by scenario writer Kei Shigema over the next several months.[23]

The game experienced relatively low sales during its release in North America, which Victor Ireland attributed to both the rise of 32-bit game consoles such as the Sega Saturn and PlayStation, and widespread media declaration of the Sega-CD's "death" in the video game market in 1995.[5] Its English release met with a favorable response, with GamePro remarking that "Eternal Blue could appear to some as 'just another RPG,' but the epic scope, appealing characters, and excellent cinematics make it much more," yet found the game's linear story progression to be its low point.[13] Electronic Gaming Monthly praised the game's "great story and witty characters", adding that "the all-important, usually absent ingredient is there: fun". The magazine's four reviewers gave it ratings of 8, 7, 8 and 8 out of 10, adding up to 31 out of 40 overall.[9] They awarded it as the Best Sega Mega-CD Game of 1995.[20]

In their review, Game Players found the game's larger scope and expanded features made it less enjoyable than its predecessor, saying "it's a better game, it's just not quite as much fun. [We] still liked it, a lot, and it's definitely recommended, but it feels like something's been lost."[14] Next Generation echoed this sentiment, remarking that "overall it's a much stronger game, but you can't help feeling something missing", yet maintained that the game's storyline was "decidedly less goofy, with more of an emphasis on drama and storyline."[17] Game Informer's panel of three reviewers gave it ratings of 9, 9.25 and 8.25 out of 10, adding up to 26.5 out of 30 overall. They described it as "a magnificent RPG with a dynamic storyline which will blow any role player away" and praised the "excellent" animation scenes and sound, concluding that it "is without a doubt the best RPG for a SEGA System."[12]

When asked if he approved of the game's reviews, Ireland replied that they were "overall in the ballpark" from what he expected, with the exception of a portion of a review from GameFan.[5] In an earlier preview of the English version, editors of GameFan called the game's translation "ingeniously written",[24] which was later quoted in an Eternal Blue print advertisement that appeared in several magazines up to the game's release. When the editors reviewed the final version, however, they questioned the game's frequent use of jokes and lewd quips in place of the original Japanese narrative[11] which Ireland described as "a complete about-face"[5] Despite their problems with portions of the translation, the magazine would still regard the majority of the game's "non-joke-laden" script as "excellent", and awarded the game a high 91% rating, calling it "one of the greatest epics ever programmed".[11]

Many of the old characters from Lunar: The Silver Star were going to be in Eternal Blue, but they were subsequently dropped. Nall, the White Dragon from the first game, resumes his role in this title. 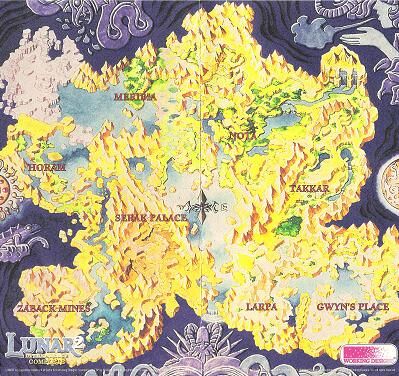 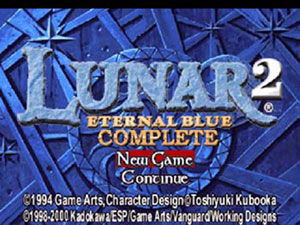