Lucia (ルーシア, rūshia?) is known as the Princess of the Blue Star. Her sole purpose was to revive the Blue Star after Zophar's assault. However, when Zophar is on the verge of resurrection, she is reawakened in order to prevent his return.

Lucia was isolated for her entire existence as her only purpose was to heal the Blue Star without any interaction with the people of Lunar. As such, she knew nothing of the human world and is very naive and curious about the aspects of Lunar. Lucia knew nothing of human emotion either, so initially, she is very serious to the point of being insensitive. As a running gag, she could also take things people said too literally.

When Lucia meets Hiro and Ruby, she begins to experience the depths of human emotion a little at a time. By the time she meets the whole group, she has integrated herself into Lunar and become good friends with everyone. She learns to feel compassion, sadness, worry, anger, relief, gratefulness, embarrassment, and most importantly, love. Lucia essentially gains her humanity through her relationships with her friends. 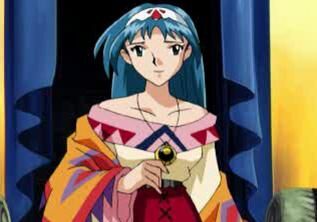 As Lucia has the ability to inherit Althena's power, at full strength, her abilities are nearly identical to those of Althena though she struggles to control the power of Creation. Lucia knows the Sacred Spells, can sense magic thousands of years old, and can easily control the power of the Four Dragons, all of which are abilities reserved for divine beings. She also exhibits the ability during Lunar: Eternal Blue to claim Althena's power for her own use after learning that Althena no longer existed as a Goddess.

Unlike other characters, Lucia cannot be controlled manually, so her actions are dictated by a combination of her own will, the status of the characters, and the situation at hand. For example, if one of the characters is low on HP, Lucia will heal that character (it should be noted that Lucia's healing abilities are initally stronger than Ronfar's. Also, when it comes to healing and buffing, Lucia seems to have a tendency to prioritize Hiro even if his HP isn't all that low). Lucia doesn't gain levels like the other characters do, instead her level is based on Hiro's current level; when he levels up, so will she, although she does still take experience during a battle.

Lucia has a host of abilities that are gained as the game progresses. You can't view her abilities or use Heal Litany outside of battle, as her magic list is blocked. Because her MP is unlimited throughout the game, she is able to use her magic at no cost to her whatsoever. Although her experience can't be seen as you level up, she does indeed level up after Ronfar does so. After Hiro has reached level 19, for example, Lucia will have leveled up again once Hiro's experience has reached 3752.

Power Charge in action, as seen in Eternal Blue Complete

Magic Barrier in action, as seen in Eternal Blue Complete

Napalm Shot in action, as seen in Eternal Blue Complete

Lightning Bomb in action, as seen in Eternal Blue Complete

A downgraded Plasma Rain in action, as seen in Eternal Blue Complete

Atomic Burn #1 in action, as seen in Eternal Blue Complete

Thunder Blow in action, as seen in Eternal Blue Complete

An upgraded Plasma Rain in action, as seen in Eternal Blue Complete

Lucia has a few hidden moves in her magic arsenal that are rarely used, and are used only in certain battle situations. However, if you use either Gywn's or Ronfar's Calm or Tranquil Litanies and select Lucia's magic menu while her picture is lightened, you can view her magic list and find the hidden moves listed there.

Note: At the Blue Spire, if the player reaches level 14, then Lucia will use her Solar Bomb, and this is the only attack she will use until you leave the Spire. When she does use it, no experience will be gained after battle from the enemies affected by the spell, preventing you from exploiting her in order to level grind any further.

Solar Bomb in action, seen only in very rare occasions

Atomic Burn #2 in action, seen only in very rare occasions