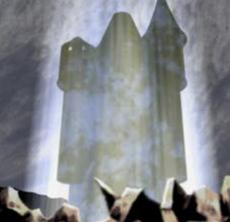 The Goddess Tower is the hidden fifth tower at the intersection of the four towers representing the Four Dragons in Pentagulia. Humans couldn't see it because of a magical barrier. Lucia sensed the presence of Althena very strongly here and thought that the Goddess was imprisioned here using the powers of the Four Dragons because of the Fake Althena within Pentagulia. In actuality, the reason Lucia could sense Althena in the Goddess Tower was because of Luna's message since Luna was the last incarnation of Althena. The Goddess Tower was later engulged by Zophar upon his revival.

It is also within the Goddess Tower that the party learns of the destruction of the Blue Star and why Lunar came to be.

Retrieved from "https://lunar.fandom.com/wiki/Goddess_Tower?oldid=3007"
Community content is available under CC-BY-SA unless otherwise noted.