Dyne (ダイン, dain?) is the second to last Dragonmaster in the history of Lunar, and a major character in with a supporting role in all renditions of Lunar: Silver Star Story.

Dyne grew up in the village of Burg. He first met Ghaleon when he was only 7 or 8 years old (though at the time Ghaleon was at least 100). He visited the White Dragon Cave when he was in his early teens with his friend Ohro Noa (who would later be Alex's father).

Dyne was 15 years old when he left Burg to begin his adventure that would ultimately lead him to become the Dragonmaster. Ohro Noa chose to stay behind, feeling that his limited skills would make him a burden to Dyne.

Events of Vane, Story of the Inheritance[]

Dyne is depicted as approximately 20 years old during the second part of the Vane, Story of the Inheritance manga. He has been adventuring with Ghaleon at least for some time, although he seems to have no magical skills of note at this point in his life. He and Ghaleon visit Vane, unexpectedly walking themselves into the midst of a crisis. The Vane Airship is caught between two cliffs with the Guildmistress Niea Ausa and several of the city's Councillors aboard.

Dyne cannot assist with the recovery of the Airship as he has no significant magical abilities, so he watches as the teenage Lemia Ausa and the remaining Councillors and student leaders hatch their plan to recover it. He watches as Ghaleon repairs the Silver Spire to enable the students' plan to work and comforts Lemia as her stress level continues to rise the closer and closer the Airship comes to running out of life support.

Events between Vane, Story of the Inheritance and Silver Star Story[]

At some point after Dyne, Ghaleon and Lemia departed from Vane, they encounter the notorious sea pirate Mel de Alkirk (also known as Hell Mel). Mel challenged Dyne to a test of strength, and they dueled for seven days nonstop. They ultimately declared their duel a draw as neither was stronger than the other. Impressed with Dyne's skills, Mel gave up his life of piracy to join Dyne's party. With the addition of Mel the party came to be known as the Four Heroes.

Some point later, the Heresy War broke out. It is unclear if Dyne became the Dragonmaster in order to bring peace to Lunar or if he was already Dragonmaster at beginning of the war, but the Four Heroes were credited with bringing the war to a close, their main contribution to Lunar's history.

15 years before the beginning of all versions of Silver Star Story, Dyne sacrificed his title and abilities as Dragonmaster, and with it, lost all of his magical power. In The Silver Star, this was due to him sacrificing it to defeat the Black Dragon who had gone mad and was now laying waste to the world. In Silver Star Story Complete, he sacrificed his powers to help Althena become fully human, despite Ghaleon's protests, believing the people of Lunar needed a divine being and didn't want to see what he thought was his best friend throwing his life away, helping her be born into the form of Luna.

In either version, he was assumed to be dead by everyone, but in truth survived. Afterwards he changed his name to Laike Bogard (レイク・ボガード, reiku bogādo?), grew a beard and presented himself as a wandering adventurer. His presumed death, however, proved to be the catalyst for Ghaleon to become a menace to Lunar.

In the very beginning of Silver Star Harmony you play as Dyne and the four heroes in what would appear to be a 'final boss' scenario, in which they are up against a man named Eiphel who has captured Althena. You fight him twice, once as a human with Althena's stolen god power, and once as a monster possessed by the princes of the Dark Star. After this battle Eiphel curses Ghaleon to have the same fate as him. After this, it is revealed this was only a bed time story told by Noah to Alex and Luna. However when you bring Ghaleon to Burg, if you go to the spring, after Alex and Luna then leave, Ghaleon will say to himself "I'm not like you Eiphel" after a flash back to the battle with him, meaning that they actually fought him.

Dyne, operating under his new name Laike, assists Alex and his party on many occasions throughout the game, providing advice and insight into the events that are happening in Lunar.

In the original game only, when Dyne is helping Alex at one point (though before revealing his identity to Alex), Ghaleon meets them both. Ghaleon recognized "Laike" as Dyne, and offered him a chance to join him and restore his power as the Dragonmaster. Dyne refuses, and Ghaleon leaves and threatens to kill him if they ever meet again. Later, Dyne tries to buy time for Alex and his friends to reach the Fortress of Althena by holding off Xenobia. Although she turns Dyne to stone as she did Mel de Alkirk, he is still able to fight her.  It is implied the curse breaks on her death.

In the remakes, Dyne meets with the party in the epilogue, where he says he is beginning a long journey.

Dyne is very laid back, and hardly ever worried. Although he finds Alex's dreams of becoming a Dragonmaster ridiculous at first, he quickly accepts them, and assists Alex in any way he can.

While he is in your party for a little while, he can essentially win a random battle in a single attack. In the original, he had some of his own abilities but in the remakes he simply had very high attack power and was maxed out at level 99. 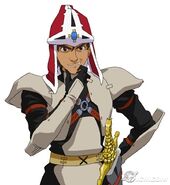