The Black Fiend is an enemy encountered in Lunar: Eternal Blue and its remake. It is found deep within the Black Dragon Cave, next to the entrance of the Black Dragon Lair, stationed there to keep the party from entering the lair. Thus, forcing the party to do battle with it.

It is the third of four Fiends encountered in your journey to access the Goddess Tower. 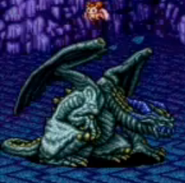 Black Fiend as seen in Eternal Blue Complete
Add a photo to this gallery
Retrieved from "https://lunar.fandom.com/wiki/Black_Fiend?oldid=5660"
Community content is available under CC-BY-SA unless otherwise noted.